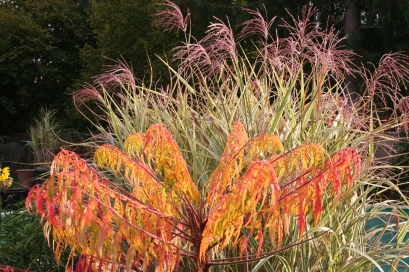 Autumn leaf and flower colour from Rhus and Miscanthus in our garden this morning.

Every day this week has been different to the last. Today it is mild and drizzling on and off, while yesterday it was dry, with just a few clouds passing by. The day before was a most glorious warm, sunny day but it began with a hint of frost. Sunday it poured down while Saturday it kept mostly dry – a bonus for guests who I took to see the grape harvest coming in at local vineyards. In short, a typical autumn week in central France.

In the town, around the market and in the supermarket, all the talk is about mushrooms, or the lack of them. We have been mushroom hunting on our daily walks with the dog and while we bring back a handful most days, there are very few about. The weather is looking encouraging however, after many months without any serious rain, so we are hoping for great things by the end of this or the following week.

Chantal is making her annual autumn jelly from fruit collected on our walks: pears, apples and grapes left behind by the picking machine. To this she has added currents and other soft fruit preserved after picking this summer and a few herbs and spices for luck. We will be bottling soon and look forward to trying it out on friends who regularly offer us examples of their own culinary efforts to try. Last week the Marquis dropped around with a sample of his Two Salmons Rillettes and our lady plumber turned up one evening with freshly hunted venison. Food is important to the people of this community and recipes are commonly argued over in the market place. 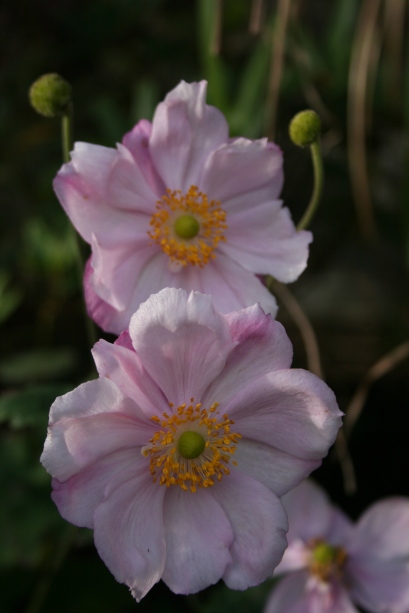 Out in the garden I am pleased to have the ground wetted as I have been waiting to start cultivating the soil for our new lawn. The lawn will be sown as soon as I can so that it will germinate and establish itself before the winter. We are trying to rehabilitate a section of the garden ruined when the swimming pool went in and to link it with an area currently the site of a very poor quality lawn. I can manage about 50 sq.m. a day fighting with the rotavator, after which I need a couple of days of rest – one more push should see the hard work done though. The next task will be the raking off of old grass, weeds and stone, and creating rough levels using new lawn edging secured along the existing beds. The ground will then be trodden down firmly, levelled again to a nice tilth and finally sown with grass seed. A last gentle rake over and we leave it to Nature to work its wonders.

Many of the bedding and herbaceous plants are having a second lease of life in this damp and temperate season: the Begonias have never looked so good, Pot Marigold (Calendula) are in full flower and throughout the garden there are splashes of colour here and there. It looks as if the Salvia Golden Delicious will flower this year: each shoot is carrying a flower bud and one is just starting to show red. We continue to pick tomatoes and our lettuce crop is the best we have had all year.

In the park the rain has resulted in a huge rise in the level of the river Cher, but not enough to put off 60 or more swans who took up residence earlier in the week. The gardeners are busily removing summer bedding and replacing it with a mixture of winter and spring flowering plants. I managed to beg a few of last season’s plants from them for our own garden: bedding Dahlias and purple grasses, no longer. I have finished taking cuttings of tender plants for the year but have tried some Holly again, a particularly attractive form which grows by the town campsite.

On Friday I am taking clients to Bourgueil to look at vineyards and taste some wine, while on Saturday or Sunday we’ll all take a trip to the Courson Plant Fair, so it’s a busy week all ’round. We are watching the weather.

Nature is bountiful at this time of the year, here in central France. We never fail to return from walking the dog without something in our pockets and at the moment, we are mostly collecting Walnuts.

There are still plenty of Hazel nuts around and as we become accustomed to the area we are beginning to work out which trees are not picketed, where to find the largest nuts and which trees are the most productive. This morning we returned with a basket full of nuts and half a dozen ceps, our favourite edible mushrooms.

Locals are often very generous when they know you are interested. With a new kitchen recently fitted we have been testing out the equipment by jam and chutney making. Not having fruit of our own, people have been giving us bags of peaches, plums apples, pears and quince. Each of them receives a pot of jam from us in return. As I speak, Chantal is cracking walnuts ready to bake a cake this afternoon.

Autumn flowers are also much in evidence now that the weather is cooling, the day length reducing and the rains returning.

Where once the ground was speckled with orchids there are now wild Cyclamen, Colchicums and, an exciting find, Saffron Crocus.

Here on the edge of the Touraine the grape harvest is all in, picked last week when it was warm and sunny. Mostly the crop was machine harvested but, talking to local growers, they are increasingly hand picking to improve quality. We are great fans of the local white but are still to be convinced that the red is worth the effort to get to know.

We are still recovering from yesterday. We had a business meeting in Valancay at 11 am and on arrival in the town the temperature was 17 degrees C. An hour later it was thermometer on the car dashboard read 21 and by the time we reached home it was 25.

The atmosphere was strange and people in the town reacted to it. Out walking in the afternoon we had hardly got to the end of the road when someone stopped us to show off his new motorbike and offered us drinks to celebrate. Staggering off to continue our exercise we were stopped a few yards on to chat with an elderly lady who was in tears recalling her dogs and admiring ours.

In the park a man had his head in his hands but beamed when the dog wandered over and gave him a lick. Prior to that we had been sitting on the beach watching the river, when our decorator came over to sit with us for a while. A strange day ended with a huge thunder storm, with a bright red sky and a game of scrabble.

Perhaps someone had drugged the water but according to the weather man a hurricane had moved up the Atlantic dragging hot African air up through France. Who needs alcohol with weather like this!