It seems just yesterday, and is actually not much more than two weeks ago, that I was swimming in the warm waters of the Mediterranean and eating breakfast on the sun-terrace overlooking the harbour on the presqu’île de Giens. Today in the centre of France it is feeling very autumnal: damp and cool, with the sun struggling to burst out of the clouds and a temperature hovering around 20° C. I know; I expect no sympathy from the English!

Grapes ready for the harvest at the vineyard of Chenenceau chateau

Actually I like autumn or, to be more precise, I love the seasonal changes throughout the year and autumn is no exception. In the vineyards of the Touraine it is harvest time and every village you drive through smells of grape juice and wine. I have visited quite a few recently and in spite of a difficult growing year, the excitement and optimism surrounding the “vendage” is palpable. Bernache, the partly fermented not-yet-wine, bubbling, cloudy and yeasty grape juice, is a wonderful seasonal treat here, sold in plastic water bottles – it would explode otherwise. It is drunk immediately it is drawn out of the vat, with roasted chestnuts and much good humour, despite having only 2% alcohol.

Wild Cyclamen carpet the ground in a local garden

There are plenty of summer flowers hanging on although the town has lifted most of its 20,000 bedding plants to prepare the ground for winter and spring flowering plants. I managed to take a few late cuttings before they did so but I do not expect a high rooting percentage at this stage in the season – plants are closing down for the year rather than rooting.

Autumn can be a colourful season, with leaf colour adding to the display both in the towns and the countryside. Under the trees in many gardens and parks the Cyclamen and Colchicum are in full flower.

Autumn is also one of the most important times of the year for planting hardy subjects and I am looking forward to the great buying opportunities at the famous Courson plant fair in a couple of weeks. At the local garden centre I spotted of fine batch of discounted Hydrangea paniculata Sundae Fraise, a compact variety growing to only 1m and with flowers which mature from white to deep pink. I bought a plant to get me in the planting mood.

Such a long gap in my writing is almost unheard of, but the preparations for our annual  holiday, the holiday itself and all the work awaiting us on our return has kept me very busy indeed. 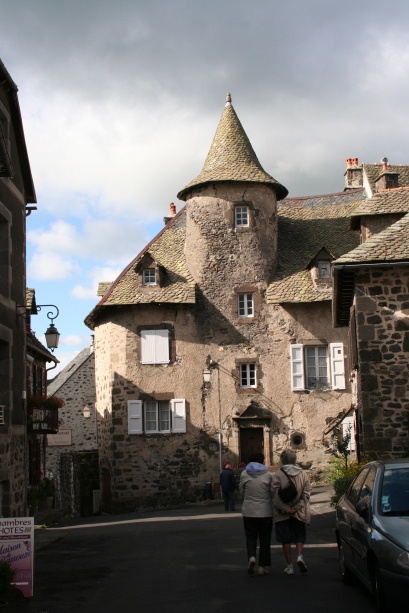 Salers – one of the most beautiful villages in France

Our journey down took us through the cool mountain scenery of the Auvergne, with a night in one of France’s most beautiful villages, Salers. 16th century buildings in dark volcanic stone sit on a hill overlooking pastures full of the local red cattle breed of the same name. Locating them is easy even in the morning mist, with clanking bells dangling from their necks audible over huge distances. After walking in the mountains and countryside for half a day we headed further south to Murat, and a night at the lake below Gustave Eiffel’s wonderful Viaduct de Garabit, built over the river Truyère in 1885. From their it was a six hour drive to our destination in the sun.

We based ourselves in the Provence this year, for a week or so of exploring the sights of the region around Hyères. We rented an appartment on the presqu‘île de Giens, a paradise for divers, kite surfers and nature lovers, jutting out into the Mediterranean sea near the port of Toulon. I dived a few times with a local club, my first in France and in French.

The land in this region is important horticulturally and nurseries of all kinds fight for space close to tourist villas, salt marshes and vineyards, in an area blessed with a superb climate and high light levels.

The lovely old town of Hyères contains the villa of the American novelist Edith Wharton, who wintered here annually from 1919 until her death in 1937. Castel Sainte-Claire is open to the public, who are free to wander the terraces of this

I spotted a slection South American plants alongside native species – Lantana in many colours and huge bushes of Erythrina crista-galli. Many Salvia species were in flower but the rare Salvia divinorum formed large, flowerless bushes. Natives includes Santolina, Lavender, Phlomis and a host of plants adapted to the dry climate, often highly scented and covered  in insect life.